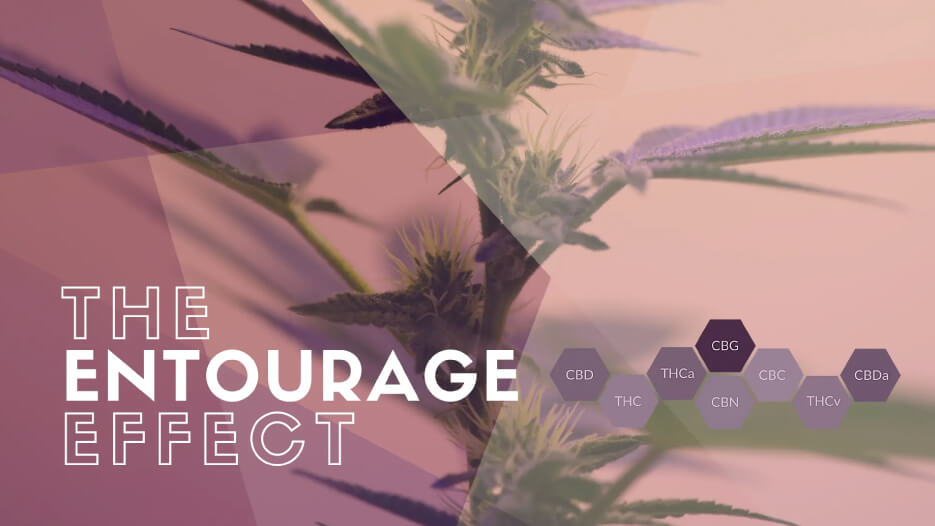 The Entourage Effect in Cannabis

Cannabis plants, including hemp, have incredible potential to enhance the health and wellness of millions of people. And while scientists are still learning how individual cannabinoids affect the human body, there’s also ongoing research to understand how the 500+ active components found in the plant may work together.

The theory that several active compounds in the cannabis plant interact together in the body to provide a medical benefit is called the “entourage effect”.

When we talk about the active components of the cannabis plant, we generally mean the cannabinoids and terpenes.

If you’re interested in learning more about cannabis, hemp (a type of cannabis plant), and cannabinoids, our article “Cannabinoids 101” is full of great information.

While there are over 100+ cannabinoids in cannabis, this is only a small part of the plant. Cannabis also contains compounds known as terpenes, which are found in many different plant species.

Essentially, terpenes are oils secreted by plants which give them their distinct aromas like citrus, mint, or pine. These unique odors help plants survive in the wild by repelling predators and attracting pollinators.

Like cannabinoids, there are over 100 different terpenes in the plant, and we are still learning more about them.

The entourage effect and science

Currently, much of the information we have on the entourage effect is anecdotal from patient experiences. Scientists are beginning to find ways to study how active components work together, and there is some data on cannabinoid-cannabinoid interactions.

One of the issues for scientists is that, in the plant, many of the cannabinoids exist in amounts too scarce to reliably obtain and study.

Another difficulty is that the concentrations of active components in the plants, and their hemp extracts, change from batch to batch. This can cause a batch to lack medicinal value.

Dr. Dedi Meiri, one of the foremost researchers in cannabis, provides examples of the difficulty in relying on the entourage effect with our current lack of data. In one of his examples, a woman experienced relief from her seizures by taking a cannabis product. When she needed more product, the next batch, purchased from the same source, did not provide the same relief. She was eventually able to find another source that worked but, it took 2 years and 100 purchases.

With cannabis providing relief for so many people, how do we ensure individuals have access to a reliable product they can count on working?

The path forward is for science to study and understand the effects of each individual molecule, then investigate controlled combinations of cannabinoids and terpenes.  It’s early days for this research, but it’s important to subject the entourage effect to the proper scientific rigor if we want to truly unlock the potential of cannabinoids.

The team at Demetrix makes this kind of scientific study possible by using biology to create individual cannabinoids faster, more affordably, and at higher purity than traditional methods. We’re accelerating our understanding of how cannabinoids affect the human body, and the development of safe, effective, and legal products using cannabinoids.

If you’d like to learn more about Demetrix and our mission to make the world a better place using science follow us on Twitter and LinkedIn.

What’s the Difference Between Cannabinoids & Terpenes?

02/12/2021
We use cookies on our website to give you the most relevant experience by remembering your preferences and repeat visits. By clicking “Accept All”, you consent to the use of ALL the cookies. However, you may visit "Cookie Settings" to provide a controlled consent.
Cookie SettingsAccept All
Manage consent